Grass-fed beef has garnered plenty of attention thanks to its health profile and taste, but will challenges of growing, processing and selling it put it out to pasture?

Whenever USDA issues a standard, it’s a safe bet that a product category has arrived. Whether it heralds a revolution is another story. 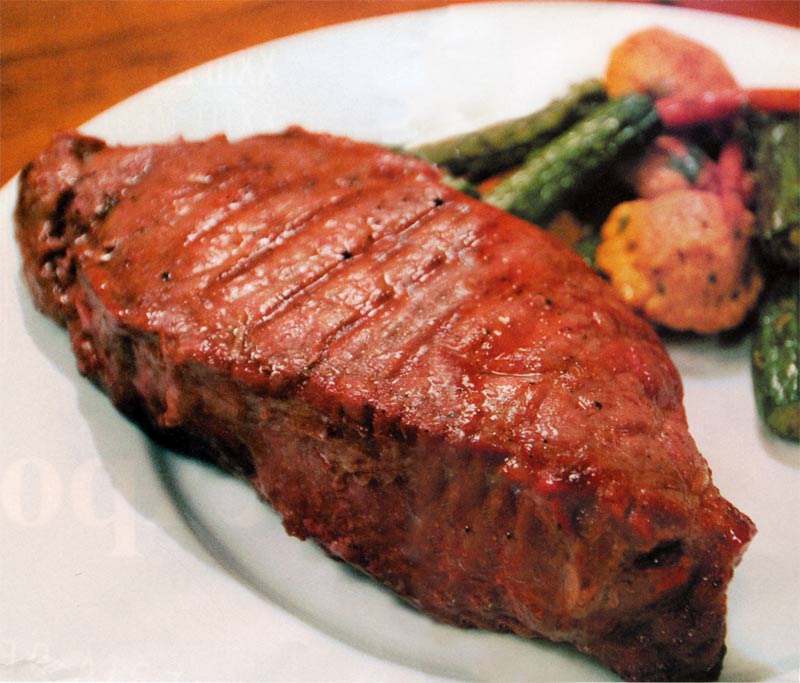 Despite its hype, the grass-fed beef category may be more evolutionary than revolutionary. Then again, it may be neither. It isn’t its health credentials that are in question. Omega-3S? Check. Fewer saturated fats? Check. More vitamins A, E and lineolic acid? Check, check and check.

Nor is its flavor an acquired taste. Variously described as “more robust,” “less sweet” and “more natural” than conventional product, grass-fed generally holds its own in the taste sweepstakes.

No, at issue is whether small-scale operators can afford the additional time and expense required to fatten up grass-fed cattle, and whether consumers will pay a premium for a product they’ve never tasted, despite the apparent health benefits it confers.

So the jury is out. Some industry members contend grass-fed will likely remain a niche product. Others predict it will grow to account for as much as 10 percent of the U.S. beef market. 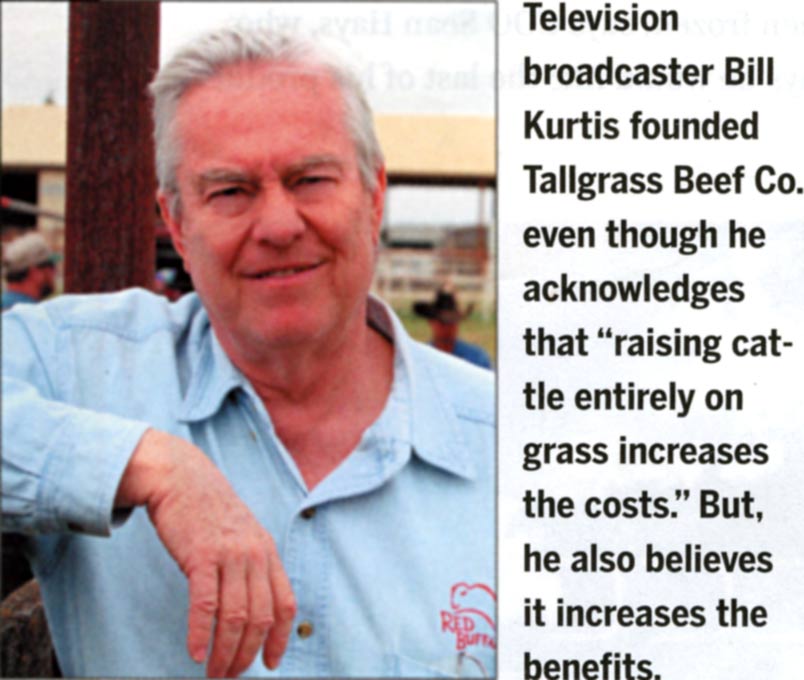 Now that would be revolutionary.

“Providing year-round grass with sufficient nutritional value to fatten cattle for consistent taste and tenderness is a challenge,” says Bill Kurtis, founder and CEO of Sedan, Kansas based Tallgrass Beef Co. “For ranchers, raising cattle entirely on grass increases the costs and the benefits. It’s an act of alchemy that transforms a maligned meat into a health food.”

Grass-fed beef currently represents only a fraction of the nation’s beef supply less than a fraction, as a matter of fact. But that meager percentage translated into retail sales of $120 million last year, according to Tallgrass Beef COO Alien Williams, who also is a partner with the Jacob Alliance, a Canyon, Texas-based livestock consultancy.

Only about half of sales were domestic, the remainder deriving from places such as Australia, New Zealand and Uruguay, but Williams maintains that more than 1,200 U.S. ranchers have begun grass-finishing at least some of their beef. With so many seeds sown, grass-fed could grow up to 30 percent annually over the next five to 10 years, Williams says.

Less promising is the fact that he doesn’t see major processors getting into the act, as they have with natural and organic meats. “It’s not worth their time,” he says. “It would require a major financial commitment, and there would have to be a significant paradigm shift to build supply, which could take years.” Don’t expect Wal-Mart and other mainstream mega-chains to carry grass-fed any time soon either, he says.

Marc Blitstein, meat director for Boulder, Colo.based retailer Wild Oats, reports that organic grass-fed beef, which the retailer only recently introduced, already accounts for 10 percent of beef sales, despite its comparatively hefty price tag some $6.99 per pound for ground chuck and $19.99 for New York strip, as compared to $4.49 and $14.99 the retailer charges for comparable cuts from Coleman Natural Foods.

The other half of the equation is cost, no small consideration given that grass-fed cattle especially those grazing on open pasture gain weight more slowly than their grain-fed counterparts. Rather than being harvested at 14 to 18 months at 1,250 pounds, grass-fed cattle generally don’t reach their slaughter weight of 1,150 pounds until they are 24 to 30 months old. The grass sets the timeline and accounts for taste and texture, though it is subject to the vagaries of weather and other variables.

Grass-fed companies positioning themselves for growth tend to contract with ranchers rather than raise their own herds. But first they must convince them to follow company protocols, then provide them with sufficient financial incentive to ensure cattle wind up in the pasture rather than the feedlot. They also must locate finishers that understand proper pasture rotation and other aspects of what Williams says is “part art, part science.”

Then there is the issue of locating and qualifying plants in close proximity to the finisher. Because few, if any, plants are dedicated to grass-fed product, operators must be persuaded to slaughter, cut and pack a relatively small number of cattle on a dedicated shift to ensure that product doesn’t mix with that from conventional cattle. None of it necessarily comes cheap.

Companies are meeting these challenges in a variety of ways. Dillon, Montana based La Cense Beef uses a seasonal model, with about 200 animals harvested annually in the fall. Animals are selected from a herd of 2,000 Black Angus cows and 1,000 yearlings that feast on lush pastures for at least 60 days once they reach the age of 14 months. All meat is processed at once, dry-aged for 19 days, then frozen, says COO Scan Hays, who says he would like the last of his product to roll out the door as next year’s rolls in.

The year-old Tallgrass contracts with several ranches and five finishers to accommodate a business that is doubling monthly. Each animal undergoes ultrasound testing to evaluate its marbling, tenderness, back fat and carcass cutout. Current yield 1859 percent, though the goal is the 60 percent to 62. percent range, like commodity beef. Though Tallgrass harvested only 20 head in July, some 2,000 to 3,000 more are being finished. Product is USDA graded for carcass quality but isn’t marketed by grade. The resulting beef is 60 percent Choice, compared with a national average of 42 percent to 45 percent for grain-fed. 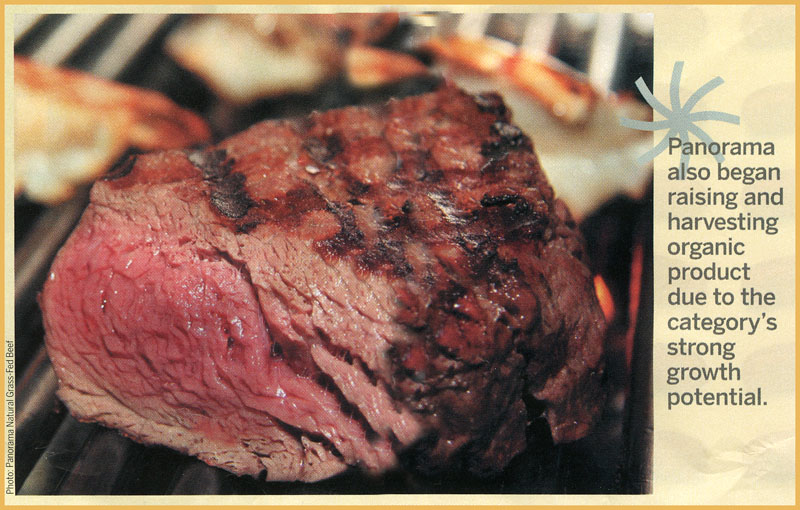 Genetics and feed play a big role in those results, as they do with Panorama’s. Panorama cattle are all Black and Red Angus that spend their last 30 to 60 days in a “conditioning corral” on rations of grass-hay and alfalfa supplemented with rice bran and almond hulls for energy and roughage. CEO Mac Graves says the breeds were chosen because they readily deposit intramuscular fat on a grass-based diet. The finishing regimen, he says, allows cattle to reach their harvest weight in just 14 to 18 months while ensuring a tender, tasty product.

The 4-year-old company adheres to a “Born and Raised in the USA” verification program, contracts with up to 45 West Coast ranches and harvests 145 head of naturally raised cattle per week, making it the largest grass-fed provider in the nation. Recently, Panorama also began raising and harvesting organic product due to the category’s strong growth potential. “Consumers have come to recognize that ‘natural’ can be almost anything, and appreciate the stricter protocols of organic,” Graves observes.

Although he won’t disclose sales figures, Graves says about two-thirds of his business involves retail distribution, with steak sales having grown about 25 percent in the past few months alone. He also is active in the value-added segment, having recently developed four types of sausage and, for Trader Joe’s, Cowday Quick-Eye Steak, a thin-sliced, ready-to-cook eye of round that includes a packet of brandy mushroom sauce.

As with any emerging category, marketing is key to moving product off shelves, or off electronic shelves. This past spring, La Cense launched a Web site to promote and sell grass-fed, and

Hays says he’s pleased with the traffic he’s getting. Though he has a ways to go, he says he hopes one day to be the “Omaha Steaks of grass-fed” a goal shared more or less realistically by all who embrace the category.