View cart “Fillet of Horn – Darol Dickinson” has been added to your cart.

Fillet Of Horn by Darol Dickinson. Featuring 34 accounts of buying and selling Texas Longhorns all over the world and the unique characters who may be cattle rustlers.

Fillet Of Horn by Darol Dickinson. Featuring 34 accounts of buying and selling Texas Longhorns all over the world and the unique characters who may be cattle rustlers. For a recommendation on the content, ask Red McCombs, Gary Lake, Gov. Sarah Palin, Bill Farson, Ron Jones, Bob Shultz, John Wayne Bobbitt, Congressman Joel Hefley,  or George Lucas.

A fillet is the best tasting, most memorable, and enjoyable part of the horn. Now, some say you can’t eat a horn sandwich, and others say they’ve done it. Some like’em with Tabasco, and others like to eat’em with jalapeños. No matter what your taste, you’ll find this book to be spicy, enjoyable, and satisfying. The reader is about to digest a treat he has never before tasted.

Fillet Of Horn stampedes from Colorado to Poland, Ohio, Canada, Africa, Holland, Texas, and the Philippines. This nonfiction account of escapades, ranch business, Texas Longhorn trading, stolen cattle losses and repossessions, will take the reader part-way into the old West, but not far enough from civilization that he can’t find his way back home at night.

These jam-packed, thirty two chapters are guaranteed to take you places you can’t get to from where you are. You will have to mosey down these cattle trails, smell the bull dust, watch for the distant patrol car, and spend some time under the drawbridge to really get the feel of it. Don’t be afraid. You are a safe distance from the branding fire even though a little singed hair never killed anyone. Take a chance.

If you are a speed-reader, this isn’t the book for you. You can’t fly through it like a bull that’s been shot from a circus canon and still catch the nutrition as it goes by. Take it slowly. Treat FILLET OF HORN like a wonderful homemade mincemeat pie. Take small bites, chew slowly, and savor the flavor of real horn. Don’t gulp! Make it last a week or so. Once you own the book, just

Fillet of Horn II is now available as an eBook and can be downloaded from major eBook retailers such as the Apple iBookstore, Barnes & Noble eBookstore for Nook, and the Amazon Kindle store. Please search for Fillet of Horn II by Darol Dickinson from your eReading device’s bookstore.

Fillet of Horn II is available on computer or eReaders with full color capabilities.  It is 435 pages, full color and 35 chapters.  Other than a few names changed to protect the guilty, it is an autobiography. Accounts involve buying and selling registered Texas Longhorn cattle by the semi load and by the pound.  The negotiations go from Canada to Texas to Poland and back. There are good and bad people in every chapter, honest ones and crooks. Four chapters document efforts to recover or collect proceeds on stolen cattle. Chapters record events where deals were made with Red McCombs, Col. Oliver North, Johnny Cash, Andre the Giant, Lynn Anderson, Blackie Graves, Sam Partlow, Dr. Ben K Green, Robert Mitchum, and Congressman Joel Hefley.  The content jumps from cattle to championship Quarter Horses, African Watusi, Dutch BueLingo then to the Western Art world and back to the comfortable Texas Longhorn pastures.

To order your eBook online:

There are no reviews yet. 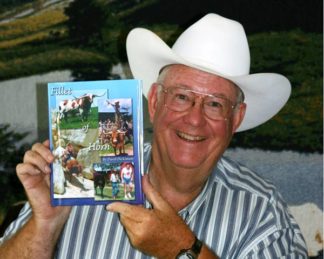 You're viewing: Fillet of Horn – Darol Dickinson $29.00
Add to cart