Presiding from 1875 to 1896 over the United States Court for the Western Judicial District of Arkansas, Isaac Charles Parker attained notoriety as the “Hanging Judge” responsible for law and order in Indian Territory. Popular accounts have portrayed him as a jurist driven relentlessly by a Biblical sense of justice to administer absolute authority over a lawless jurisdiction inhabited by bold outlaws.

“Let No Guilty Man Go Free”, the first new Parker biography in four decades, corrects this simplistic image by presenting Parker’s unique brand of frontier justice within the legal and political context of his time. Using primary documents from the National Archives, Missouri court records, and other sources not included by previous biographers, Roger H. Tuller demonstrates that Parker was an ambitious attorney who used the law to advance his own career. Parker rose from a frontier Missouri lawyer to become a congressional representative, and when Reconstructionist-era politics denied him continued progress, he sought the judicial appointment for which he is most remembered.

Although he sent seventy-nine felons to the gallows, Parker’s public hangings were actually restricted by federal officials, commutations, and pardons, as well as Supreme Court rulings. In an ironic twist, during his final public interview, the “Hanging Judge” claimed he supported the abolition of the death penalty.

There are no reviews yet. 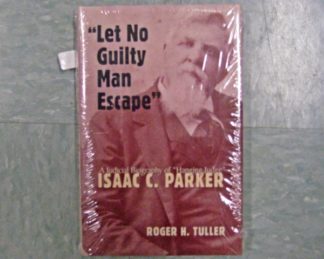